In November of 2019, the Chattanooga market had some hair raising fun during their first ever beard competition for no-shave November.

The market asked local vendor Chattanooga Beard Company to spearhead the competition. Many of the contestants found out about it through advertisements at the Chattanooga market and on Facebook. Matt Patty, founder of Chattanooga Beard Company, created different categories for the men to compete in. “We had a category here called “Most likely to succeed. Generally that’s under a college business beard, but I kinda made it a little bit more fun. Since it is no shave november and a lot of guys are just starting their beards,” said Patty. Other categories included most festive, longest beard, and the most well groomed beard. Patty, who hosted the competition, is a barber and makes different men’s grooming products. “Beards are obviously a trend but they’re also becoming more pop culture more okay in the workplace. But beards just in general, I mean, it’s just hair grows off your face,” said Patty.

Joey Standford, like many contestants, found out about the competition through Facebook. Stanford entered his beard, which he has been growing for a little over five years, in the competitions for longest and well groomed. Stanford said that there are pros and cons to having a beard. “It gets a lot of attention for sure. But it gets in the way a lot too. Everywhere I go I get ‘I like your beard. How long have you had that thing?’ I basically started it because I didn’t like shaving and then I just let it go,” Stanford said. This disdain for shaving is shared between each contestant that I talked to, including Larry Harbman.

Harbman entered his beard into the competition for well groomed and most likely to succeed. He’s had his beard since 1972. He found out about the contest through attending the Chattanooga market. “It was a fun event even though I didn’t get in the front line,” Harbman said. One person who did get into the front line, and won the ‘best groomed’ category, was BJ Meadows.

Meadows, with his bald head and a long, white beard. entered the contest at the request of his twin 14 year old sons. “I feel pretty great about this because I didn’t come into this expecting to win anything. I was purely doing it for my boys and the competition was obviously pretty stiff and you know, the crowd was supportive and they jumped in on it,” Meadows said. This was his first beard competition. He added that he plans to compete again next year. Meadows, who has had his beard for “about three years,” appreciated the opportunity. Each winner took home a goodie bag full of products for their beard.

Overall, the contest was “real light, easy fun” for everyone, according to Patty. “There’s some beard contests that get kind of serious, but all in all it’s just like minded people going to put their beard on a pedestal and let people judge them.” 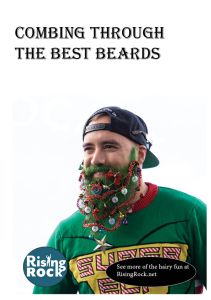 Alex Ogle is a photojournalist with a passion for storytelling and capturing moments. She’s a graduating senior, pursuing a degree in Communications with a minor in Psychology at The University of Tennessee at Chattanooga. She works as a photographer and a contributing writer for The University Echo. You can usually find her with a pair of earbuds, listening to music throughout all times of the day. Contact Alex Ogle at myk113@mocs.utc.edu.