Drag bingo is a night where drag queens from the Chattanooga area come to host a bingo night for anyone who wants to participate.

The queens sit up on the main stage, in full drag attire with a metal bingo cage and a sarcastic comment for anyone who gets too rowdy. The event is high energy, lots of fun, and many of the attendees are regulars for the Wednesday night event.

While bingo night always welcomes new queens to guest host, there is always one queen who is the lead host for each Wednesday.  After the former host left to pursue drag in a different city, T’yana Montice became the current presiding host.

Montice is from the Chattanooga area and has been performing drag for around 15 years.

According to Montice, drag bingo became a tradition around three years ago after the Tennessee Valley Pride board decided to reach out to local businesses and see what they were willing to do to help the LGBTQ+ community grow in Chattanooga.

Tucked away, in a small Chattanoogan side street, is The Honest Pint, a bar that hosts numerous community events, decided to partner with the LGBTQ+ community and host bingo night.

“Honest Pint really stepped up and said they wanted to do drag bingo,” said Montice.

Evelyn Caldwell, a local Chattanooga drag queen, said, “you come in and get a table and bingo card then the drag queens come on stage and insult you and they are as vulgar as they can possibly be. There are winners per round and there are three rounds per night.”

Ophelia Cox, another local drag queen who mainly performs at the palace theater, said her experience at drag bingo was, “so lit!” She performed at the drag bingo during pride week and said there were “so many drag queens from Chattanooga there that night.”

Cox would suggest that anyone come to a drag show of any kind because of the experience that comes with seeing drag queens perform. She highly encourages people come to drag bingo because “with T’yana hosting now, she is just the life of every single party and she can turn a room out with a single look.”

The whole event, according to Caldwell, is about having fun. “It’s important to leave behind the politics, the outside stuff and come have fun in the drag bar,” said Caldwell.

Players who have never come before are always surprised by the level of excitement and fun that the event has to offer.

Savannah McGuire, a Chattanooga native, said that although she’s grown up in the area she has only just recently heard of the event.  “My friend Hailey brought me out and I love it!” She said she is usually socially awkward but in this environment she felt comfortable to be completely herself.

McGuire said the people are her favorite part of the event because of how nice and inviting they all are.

Her friend, Hailey Byers from Ringgold, Georgia, said, “It’s just a great environment. Everyone is just so nice to you and so inviting.”

The journey of venturing into the world of drag can be exciting and tumultuous, but one thing that remains consistent is that each queen has a unique experience.  Ophelia Cox, or Normand Caissie, shared her story of how she came to be a performer in the world of drag. “

Cox explains that because she performed musical theatre from a very young age, she was always exposed to drag influences. “Growing up with Rocky Horror, Hairspray, and even Cathy Rigby in Peter Pan, like all of these drag influences were always in my life.”  She goes on to explain that her perspective on drag became much broader after discovering a show called Rupaul’s Drag Race, a show in which 13 drag queens compete in various challenges for the title of “America’s Next Drag Superstar.” Cox says that the show helped to break down walls for the mainstream audience to challenge their view of what drag actually is.

The show encouraged Cox to experiment with drag for herself, and in October of 2017, Cox began investing in drag and practicing small performances in her bedroom. Two years later, Cox felt as though she should let drag go because, “it was a lot of money to put into something without getting anything back, and I was no longer feeling creatively satisfied.”

A week after coming to the conclusion that she should quit drag entirely, Cox saw a social media post from the Palace Theatre saying that they were looking for new drag queens to join their cast. Cox decided to attempt drag one last time. She auditioned at the Palace and got the job.

“I’ve always loved storytelling and I think queer stories are really really important, and the most important part of drag to me is showing people that it’s not just a T.V. show competition or a reality show competition. It’s a small part of drag, but there’s so much more to it,” said Cox. She goes on to explain how there are multiple drag stories and queer communities that need a platform to tell their story.

Cox now performs regularly at the Palace Theatre, occasionally participates in drag bingo at the Honest Pint and is involved with local pride parades. When asked about her favorite part of drag, Cox says, “it just feels like home to me. I highly recommend people do drag because it pulls out this confidence in you; a confidence that I’ve never felt before in my entire life.”

Cox is thankful to the drag community in Chattanooga, saying that it is the most supportive and encouraging communities she has ever encountered.  She says that multiple queens have helped her by giving her tips and also giving her costumes that they no longer need. Ever since she decided to fully purse drag, she has felt truly embraced by the entire drag community. 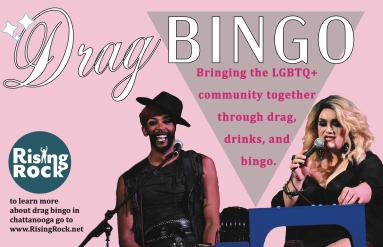 Savannah Champion is a senior at the University of Tennessee at Chattanooga, majoring in Communication.  She is a writer, planner and is proficient in the Adobe Creative Suite. She loves performing Shakespeare and wants to help organizations form an intentional connection with their target audience. Contact her at lxj575@mocs.utc.edu.

Riley Gentry is a Senior communication major minoring in women’s studies at University of Tennessee at Chattanooga. She has a passion for journalism and works as a staff writer and photographer for the University Echo. She enjoys experiencing new cities, photography, and going to music festivals. Her dream job is to be a writer for Rolling Stone magazine. Help me share more amazing stories at mjx124@mocs.utc.edu.

Lorenzo Pickett is a senior at the University of Tennessee at Chattanooga who majors in Communication. He has experience in guest services and has been a camp counselor for the past 4 years. Lorenzo’s passion is storytelling, creating art and showing genuine love and loyalty to those around him. He can be contacted at qfv861@mocs.utc.edu.

Esme Nance is a senior at the University of Tennessee at Chattanooga pursuing a Bachelor’s Degree in Communication. The past 4 years she has worked as a merchandising specialist and assistant buyer at a local boutique. Esme is fluent in Spanish and spent time studying in Spain. Her passions include videography, news media and aspires to use her skills in a PR career. Contact her at hcy328@mocs.utc.edu.