On September 11, 2001 at 8:46 a.m. the United States of America experienced one of the worst terrorist attacks of the modern age.

It’s been eighteen years since the greatest tragedy America has seen in modern history but, for a lot of people, it feels like that day happened only yesterday.

Each year, people all over the country remember the events that unfolded that morning and how it impacted their lives personally.

At the University of Tennessee at Chattanooga, a “Remembrance Walk” is hosted by the ROTC program on campus. The event allows anyone that wants to participate to pick up an American flag and walk around Chamberlain field, as a remembrance of those who lost their lives and loved ones due to this horrific disaster.

Starting at 6:30 a.m. the flag is constantly carried by a member of ROTC or attending participants until 7 p.m.

Joselyn Quintanilla, a participating member of ROTC, said she 3-years-old when 9/11 happened. She remembers sitting on a couch with her parents as they “sat and waited” for what would happen next.

Quintanilla says that she feels very proud to be a part of ROTC and the event they facilitate for 9/11. She says that being a part of ROTC allows her to see a lot of diversity on campus and within the community but that it’s amazing to see an event like today bring together different people.

She said, “I think a lot of people are scared to come out and participate because they aren’t old enough to remember the event, or they feel like 9/11 was not a relevant part of their life, but today’s event helps remind those people that they can still be included in the honoring and remembering of what happened that day.”

Linda Hinkle, a coordinator for Veteran Services and retired Army medic said she was in the grocery store with her 2 young sons and saw the first plane crash on the TV. “There was no sound, and it was oddly quiet,” said Hinkle.

Connor Dufrane, a junior political science major, in the battalion S5 for the University of Tennessee at Chattanooga ROTC program, said “This event is a lot more personal… anyone can walk around and pick up a flag. It makes it so anyone can be a part of it and remember those who lost their lives that day.”

Dufrane said that to him 9/11 means the ultimate sacrifice those men and women paid to keep us free and that it’s something we, as a country, are still fighting to this day.

Sargent Ryan Springer, a cadet in the ROTC program who is still on active duty for the military said the “Remembrance Walk” is important because “instead of just seeing something you are actively talking part and sacrificing time like those men and women sacrificed their lives. You are actually going through something physical to relate to what they did.”

The event brought together students, faculty, staff and anyone who wanted to join in the honoring of those men and women who gave their lives and time to save as many people as possible. The effects of 9/11 still haunt the nation but will be remembered as a monumental part of U.S.A.’s history for many more years to come. 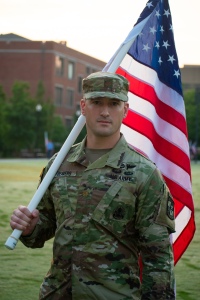 Today marks the remembrance of an event that would change the national security of the world. September 11, 2001 was a day that gripped citizens across the United States with the reality of unspeakable evil. That day in history would unite Americans in an overwhelming sense of sadness, panic, and disbelief. The true heroes we remember are those that risked their lives to help bring hope to those in great suffering.

Major Kevin Beavers, department head of military science at The University of Tennessee at Chattanooga, honors along with the ROTC students the lives of the fallen and all the branches of the military, police, and fireman that volunteered that day to help. Major Beavers remembered September 11, 2001 as a day he would never forget. In a small Soddy Daisy High School JROTC program, Major Beavers was told by his captain that the military he was about to enter would not be the same after September 11th.

After September 11, Major Beavers attended the United States Military Academy where he graduated from in 2008 as an air defense artillery officer. He then experienced several deployments one in Irad in 2010 where he was a platoon leader where he then was promoted as a captain, another in Jordan as well as Afghanistan. Major Beavers believes that it is important to remember September 11, 2001 with a remembrance walk every year for several reasons. The reason to remember this day is because it was a moment that affected our military history, to not repeat or enter into any wars unless necessary to do so, and to remember those fighting in active conflicts around the world today.

As his career now transitions as the head of military science as a Major, he looks as his career now with a moral responsibility. “ I’m thankful to come back to my hometown and have an impact on the next generation of soldiers. I want these officers to represent UTC well.”

Elian Richter works as a photojournalist and action photographer. He has experience covering events such as USA Boxing qualifiers and Presidential arrivals on Air Force One. Elian has had works published on Rising Rock Media and the UTC Echo. In his free time, Elian enjoys rock climbing and being outdoors. Contact Elian Richter at wbn751@mocs.utc.edu.

Amanda Morgan Fann is a photographer, graphic designer and writer, pursuing a degree in both Communication and English at The University of Tennessee Chattanooga. She is the Assistant photo editor and a staff writer for the University Echo. Her passion lies in storytelling and her community as she constantly works at being the voice for people who may not feel they have one. Amanda has a love for performing and currently dances on UTC’s hip hop majorette team, The Ladies of G.O.L.D. If you have a story you wish to share or any questions, email her at srn924@mocs.utc.edu.

Riley Gentry is a Senior communication major minoring in women’s studies at University of Tennessee at Chattanooga. She has a passion for journalism and works as a staff writer and photographer for the University Echo. She enjoys experiencing new cities, photography, and going to music festivals. Her dream job is to be a writer for Rolling Stone magazine. Help me share more amazing stories at mjx124@mocs.utc.edu.

Marielle Echavez is a senior studying Communication and Psychology. She is both a staff writer and photographer for the University Echo but is most passionate about videography. She plans to pursue video production post-graduation. Some of her work is displayed on @mariellejaimedia
on Instagram and can be contacted at wcb788@mocs.utc.edu.

Jillian Stewart is a Junior at The University of Tennessee at Chattanooga studying
Communications with a minor in Religion. She is passionate about telling others stories using visual media. She enjoys a good cup of coffee on a rainy day and true crime podcasts. Contact her at bcv184@mocs.utc.edu.

Savannah Champion is a senior at the University of Tennessee at Chattanooga, majoring in Communication.  She is a writer, planner and is proficient in the Adobe Creative Suite. She loves performing Shakespeare and wants to help organizations form an intentional connection with their target audience. Contact her at lxj575@mocs.utc.edu.